One of Australia’s newest resorts accommodates visitors on Western Australia’s North West Cape in facilities built to withstand a beachfront environment in a cyclone zone. Developers of the resort chose Permalite® aluminium roofing and walling.

Central facilities and accommodation units of the Novotel Ningaloo Resort at Exmouth, 1,200 kilometres north of Perth, are just 50 metres from the high water mark in a region famous for one of the largest fringing coral reefs in the world.

Developers of the resort chose Permalite Waveline® aluminium roofing and walling as an attractive, durable cladding for the villas, bungalows and central facilities in the A$25 million development.

The 5,000 square kilometre Ningaloo Reef may be less well known than the Great Barrier Reef, but it has 250 species of coral and 500 species of tropical fish and is one of the few places where visitors can swim with the world’s biggest fish, the whale shark.

The Permalite® cladding system chosen for the Novotel resort at Ningaloo Reef is made from marine grade aluminium and is popular for commercial applications in coastal and industrial areas due to its long term durability in aggressive environments.

Nearly 15,000 square metres of Permalite® in the colour Silver Coin was supplied for the project. The majority was roll formed in the Permalite Waveline® profile at BlueScope Lysaght’s Forestfield service centre in Perth, which also fabricated the custom flashings required. 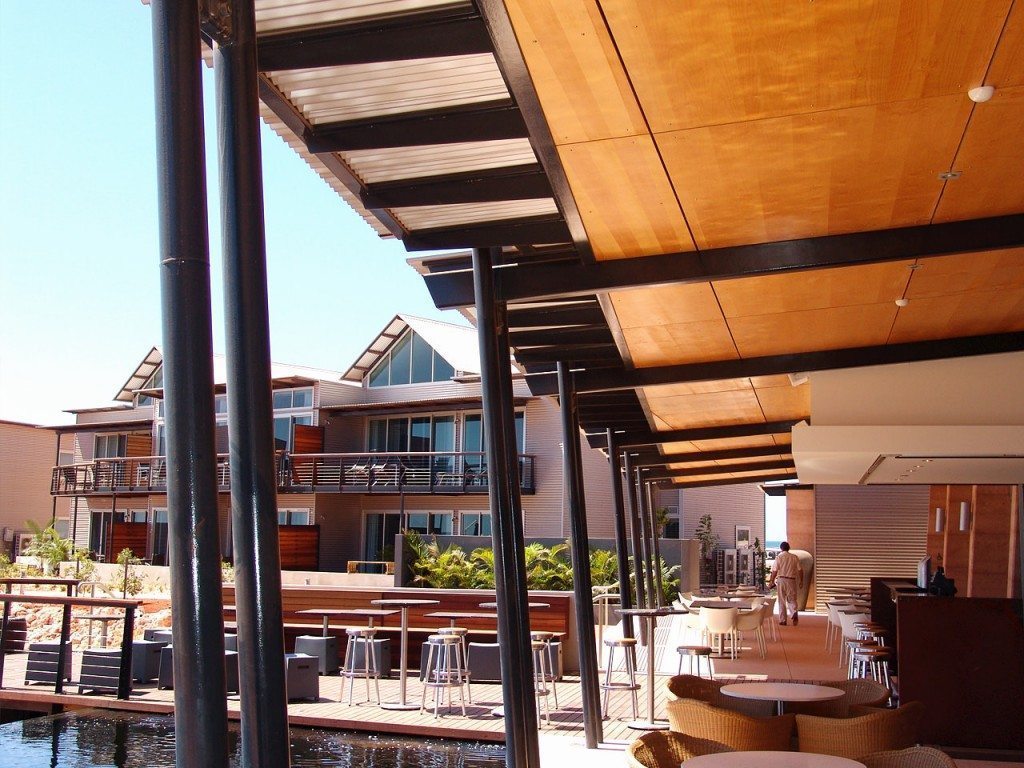 Steve Marinich’s company has completed many jobs with Permalite® in remote locations, but the resort was the biggest single project it has tackled.

“I’m absolutely impressed with Permalite® cladding and I suggested that it be used because it suited the salt air environment and because of the ease of working with it,” Steve Marinich said.

“The developer agreed because of the strong warranty provided by BlueScope Lysaght and because of considerable cost advantages over the alternatives. There are no special requirements when handling the Permalite® sheets. It was specified in a rigid 0.9mm thickness, which meant there were no problems with roof traffic during the construction phase. You can walk on it just like any other roofing material.”

Steve Marinich took three roof fixers to Exmouth from Perth and construction took place over eight months, including two shutdowns because of cyclone activity in the area.

“Because the resort is located in a cyclone area we used special stainless steel fixings to secure the cladding and we were particularly careful to seal the roof areas against wind driven rain,” he said.

Steve Marinich said that the cladding work took no longer than a steel deck would have required.

“It would have been faster if the job was in Perth, but there were really no issues with the speed of the work,” he said. All wall cladding was applied horizontally, except for the division screens between accommodation units.

A layer of insulation between the cladding and the steel framing eliminated any risk of electrolysis problems.

Steve Marinich said the resort project was the first time he had worked with the Permalite Waveline®. He has subsequently had requests for quotes to fix it to three houses on the Exmouth Marina near the Novotel Ningaloo.

“It creates a clean, modern style which suits the area and it has the durability and corrosion resistance to withstand anything the climate can throw at it,” he said.

The Permalite® range is part of the BlueScope Steel’s portfolio of niche products which provide cladding solutions for all building environments.

Permalite® products provide a cladding option between Colorbond® Ultra and Colorbond® Stainless steel for corrosive environments in terms of durability and cost.